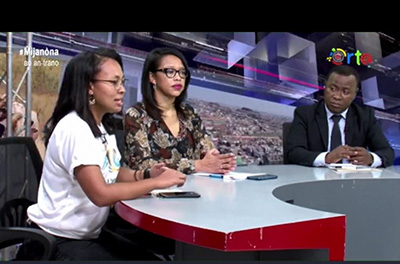 The debate opened with a discussion of how a balance can be found between forest conservation and commercial logging in Madagascar. “Wood demand increases with population growth, increasing pressure on our forests”, said Mrs Claudie Razafintsalama of the GNEFM. To overcome this, the President of the Alliance Voahary Gasy called for a restructuring of the forest and protected areas management system to truly combine rural development and environmental protection.

Issues related to environmental crimes and illegal exploitations were also raised including a discussion of why these are so difficult to tackle. The minister explained that they are working with the Ministry of Justice to combat this scourge. However, Alexandra Rasoamanana (from Forest4Climate&People) acknowledged that the sort of zero-tolerance approach they are taking for large-scale infractions is not the most appropriate approach for forest-dependent populations, particularly those that have been established prior to the establishment of protected areas. Moreover, she emphasized the importance of considering the needs of these forest-edge communities when implementing forest policy.

The very thorny issue of migration was also discussed. The minister acknowledged that lack of investment and infrastructure in the regions, combined with climate change, drives populations to migrate to forested areas. There are issues of stigmatization of migrants and they can add pressure on natural resources, said the Minister.

The overall conclusion was that environmental issues should not remain an area for environmentalists. In order to be able to protect the environment and achieve development, it is necessary or even imperative to promote a multisectoral approach, a better inclusion of all stakeholders for a long term and common vision.

You can watch the full debate on this link.